One of Atlantic Canada’s top musical exports ZAUM have just released dates for their second European Tour in support of their sophomore album “Eidolon”.  The two track 40+ minute full length was released worldwide in October via Swedish based experimental metal label I HATE, garnering 60+ fantastic reviews to date.

The bands fifth trek overseas is comprised by a 16 date tour with instrumental post-doom English quartet Telepathy, spanning mostly the UK and France wrapping up with a showcase at Roadburn -- Europe’s leading underground festival for psychedelic, avant-garde, doom or any other variation of leftfield sonic pleasures that push the boundaries of music.

In their few years as an active band, they’ve unleashed old world inspired “Mantra Doom” throughout 200 tour dates spanning 19 countries, with cities ranging from Vancouver to Moscow.  The duo also recently won a Music New Brunswick Award for “Loud Artist Of 2016”,  garnered a 2015 ECMA Nomination, and aligned some impressive support stints for heavyweights such as Voivod, Pentagram and Cauldron.

ZAUM is a passage toward the dark realizations of the old world; a monolithic doomy mantra based meditative experience forged by bass and drums interwoven with sitar, woodwind, string and synth textures.  Based in Moncton, New Brunswick – observers experience a calming process whereby the astral and physical planes can co-exist and be understood from a natural perspective.

"ZAUM blends several moods into a really attractive, cohesive work that not only pays off, but also distances them from Om, creating for themselves a sphere of their own."  -Sputnik Music

“a new level of headphone-ready, open-consciousness expanse.  Nothing matters. Give up your expectations. Quit your job and move to the forest.  Build a temple by a river and spend your days naming the gods who live in the trees around you." -The Obelisk

"Their sound encompasses the enormity of the likes of Sleep and Om, yet works in a mysticism that’s haunting and ethereal. The 40 minute span of this release is a sitar driven daydream that carries the gravitational force of tectonic plates shifting." -Iron Fist

"Hold onto your bong, ponder those scraps of eastern philosophy you’ve picked up watching Kung Fu films from the 1970s, and prepare to escape from Samsara." -Ave Noctum

"Consists of dread and a haunting sensation to glimmers of hope, but mostly dreadful darkness.  ZAUM cast their own dark shadow, one I don’t mind being consumed by." - Bucketlist Music Review (10/10)

"Few bands can touch the New Brunswick doom duo in terms of sheer hypnotic atmosphere. Eidolon sees them go further down their singular path into the heavy unknown. Prepare to be transported to a higher realm." -The Sludgelord 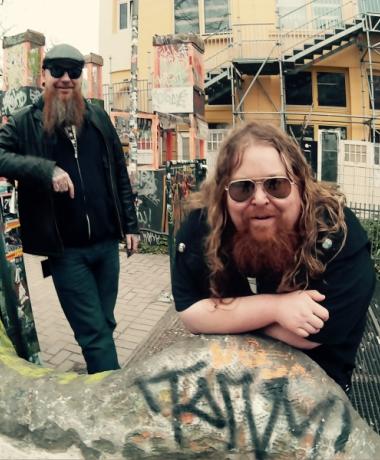