A metal trio band located in Fredericton, NB, fronted by frontman/visionary Eric Chase. Wandering the music scene 90's a time when genres were making that exchange that happens every decades end. What was once called Thrash Metal was a near flat line movement as Grunge emerged. I remember seeing covers of the metal magazines in stores, I always checked them out, was a source of info, paper-net ;) There was no internet outside of cities in those days. Seeing bands like Metallica, Skid Row, GnR, Dio, on the covers and it go from that to Nirvana, Pearl Jam, Sound Garden and stuff I was WTF, what is this? where's the metal, what's happening? right. It really effected me when that all happen, I say that because I actually felt something inside like when you've actually lost something of value. Traces of the top metal acts of the thrash metal scene can be found in the fundamental blueprints of Civil Defence's structure. I wanted to be categorized as something different. It just popped up one day in thought so I came up with "Galvanized Metal" and what is galvanized metal, it works it's pretty solid I think. It puts a modern picture in mind other than instantly thinking 80's Thrash Metal. I am greatly influenced by the greats or who I feel are of that time. Megadeth, Testament, Metallica, Flotsam & Jetsam to be very influential bands and well crafted at the art of thrash. Dave Mustaine (Megadeth), Eric Peterson ( Testament), Jerry Cantrell (Alice in Chains), Chris Holmes (W.A.S.P) growing up listening to these bands sparked the whole thing inside me musically and lyrically. For music made 30 some years later with a huge number of bands from that time I think I done pretty good for what I have created. You can't point and say that "that part is from such and such song" there are no rip off's from any of these bands, I have a style of doing things my way and I think that speaks for it's self when listening to CD (Civil Defence) 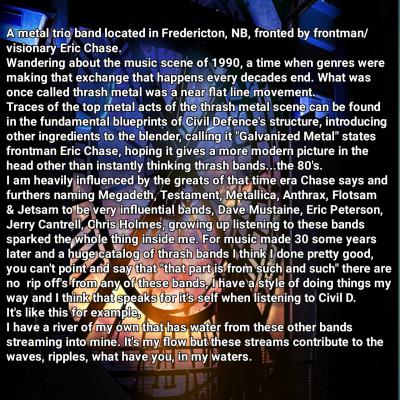 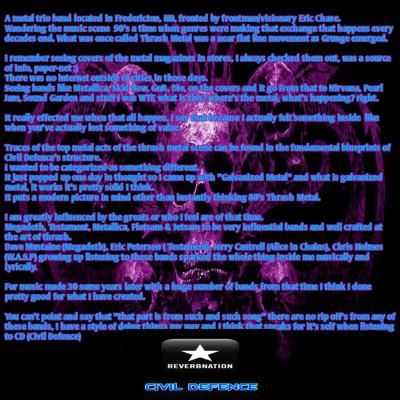