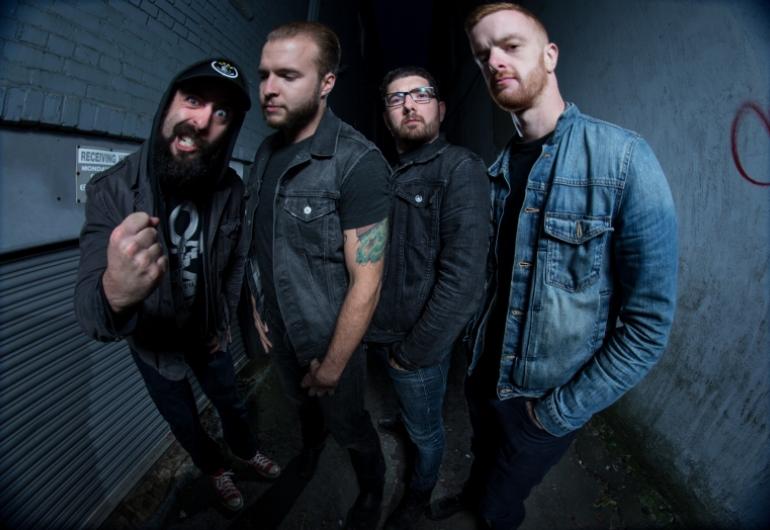 Holding Patterns is a rock record, and The Motorleague is a rock band.

That may not seem like news to those that know them, but really, it is. The Moncton, New Brunswick-based foursome have been an East Coast scene staple for nearly a decade and, in recent years, have further propelled their profile across the country.

It’s easy to tell why. The live show is notoriously intense and the sounds they send from the stage are nothing but passionate and pure. But then, band photos from over the years are full of faces come and gone, and the music itself has bounced between everything from skate punk to stoner metal and plenty in between.

Here’s where that changes, though. With Holding Patterns, The Motorleague – guitarist Nathan Jones, bassist Shawn Chiasson, drummer Francis Landry, and vocalist/guitarist Don Levandier – have cemented their union and, subsequently, their status as a straight-up rock band, raw and raucous.

“This is finally four guys with the same vision,” Levandier begins. “We embraced that we’re a full-on rock band, and with this record, played up the writing to what we know we’re good at.”

What they’re good at is blasting out big riffs and big hooks while being mindful of melody and dynamics. Rooted in the same overdriven single-string riffage and thundering rhythms that fans have come to expect, Holding Patterns sheds the superfluous elements and focuses in on the band’s unbridled ferocity and fervour. It’s also the most cohesive and focused of their output to date. “These were the only 10 songs we took into the studio,” Levandier says. “I think they feel more reflective of each other and fit together really well because of that.”

Recorded at Toronto’s Vespa Studios with producer Eric Ratz (Billy Talent, Big Wreck, Monster Truck), the collection cascades from hard-hitting numbers like first single “The Boards” and “You Won’t Believe What Happens Next,” welcomely reminiscent of the earlier years, to slower radio-ready sing-alongs like “Don’t Look Away” and “Burn Everything.” Regardless of the tempo or intensity, though, there’s something magnetic in every single one of these songs.

Every mile on the odometer, every sweat-soaked stage, and every ringing string is work towards the same simple goal: becoming a stronger, better band. “I know that’s a bullshit answer that everybody says, but we want to keep writing better songs and get better at everything we do,” Levandier says. “I’d love to be at a point where, of the 365 days of a year, we’re on the road for 360 of them.”

Sometimes, it may seem like that’s already the case. After all, they’ve been at it for nearly 10 years and, at times, success can feel like an impossibly steep climb. But this band isn’t about sour grapes. Instead, Holding Patterns represents reinvigoration and reassurance: The Motorleague is a rock band. Nothing more… and certainly nothing less.