Canadian contemporary folk music singer-songwriter Cameron Molloy is a natural born performer. He effortlessly delivers captivating vocal performances with a relaxed stage presence. Cameron has arrived at a place in his performances where he enchants people with both his voice and his instrument. Those qualities plus a story telling songwriting ability beyond his years makes Cameron a definite gem in the musical community.
Following numerous coffee house performances at the age of eight, he was inspired to embark on his songwriting career. Years later, his relentless and prolific dedication is a testament to his destiny to create a deep catalogue of exceptional songs. Releasing his first self-titled EP at the age of twelve that showcases an eclectic blend of genres and his multitude of music personalities, Cameron’s has since been honing in on his craft, ultimately finding his niche. His debut album “Lyric Journal”, released January 10th 2020, is an intimate collection of songs each with its own unique story of love and loss that touches the hearts of listeners. With the intention of keeping the sound authentic to live performance and his Maritime roots, “Lyric Journal” showcases his ability to deliver exceptional lyrical content and memorable melodies that listeners believe we’re crafted by an industry veteran.
This young export artist at the age of 20 years old has an immense list of performances that include; appearances at the Larlee Creek Hullabaloo Festival, the River Jam Festival, at the ECMA’s as a Radio opening artist, at Music NB as a Youth Showcase Artist, the Stan Rogers Folk Festival as a Main Stage Tweener and even a top nine finalist on the hit television show “YTV Next Star” that was broadcasted nation-wide. His passion for giving back to his community is a character trait that speaks volumes for this young artist. He has performed at countless charity events that include; The Riverview Arts Centre in support of Becca Schofield, the Christmas Daddies/Tree of Hope event in support of cancer initiatives, Hockey Heroes for the Heart and Stroke Foundation, and many more.
Cameron’s ever-growing fan base via social-media on platforms such as; YouTube, Twitter, and Instagram are just the tip of the iceberg for this musician. He continues to improve on his skills, attending songwriting workshops and networking to seek out new opportunities that include showcasing his abilities at music industry conferences and festivals. With a bright future in front of him, his fans can be assured, that his best work is yet to come … 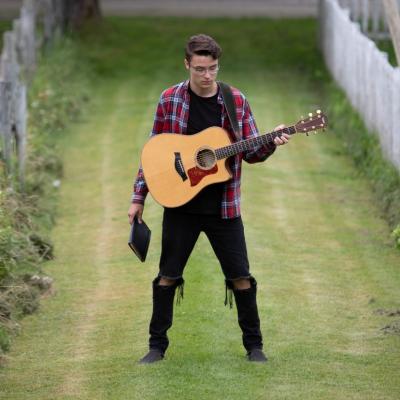