"What an impressive sound they have put together" - Terry Parker, Atlantic Axess

Spoutnique's unique sound is a product of singer/songwriter Paul Bourgoin and his musical imaginings.  “My Blue Sky Turns Teal, Vol. I” is a project that started out as a 5 song EP, but quickly evolved into a concept album that, becoming too colossal for a single release, was ultimately split into two volumes.  The album was recorded and produced by Bourgoin and longtime musical collaborator Daniel Bérubé, who also mixed and mastered the album.

Spoutnique prepared a unique CD release party, where attendees were able to experience “My Blue Sky Turns Teal, Vol. I” in its entirety as a mini-movie, conceived and directed by singer/songwriter Paul Bourgoin.  Blending animation and live-action and set in a parallel universe blurring the lines between reality and fiction, the songs from the album become the soundtrack to a short film that transports the audience through an interstellar love story which exposes the complications of impersonal communication in the 21st century.

Music•Musique NB celebrated a year in music during its 9th annual Prix MNB Awards Show, at the...
Blog

The Hypochondriacs and Chloé Breault are leading the nominations for the 2018 Prix MNB Awards. The...
Blog

Caraquet will be the place to be this October, as organizers of the 12th edition of New Brunswick's...
Blog 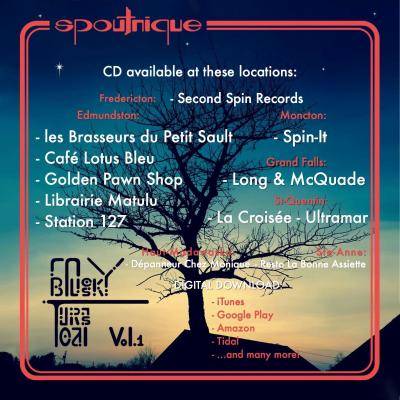